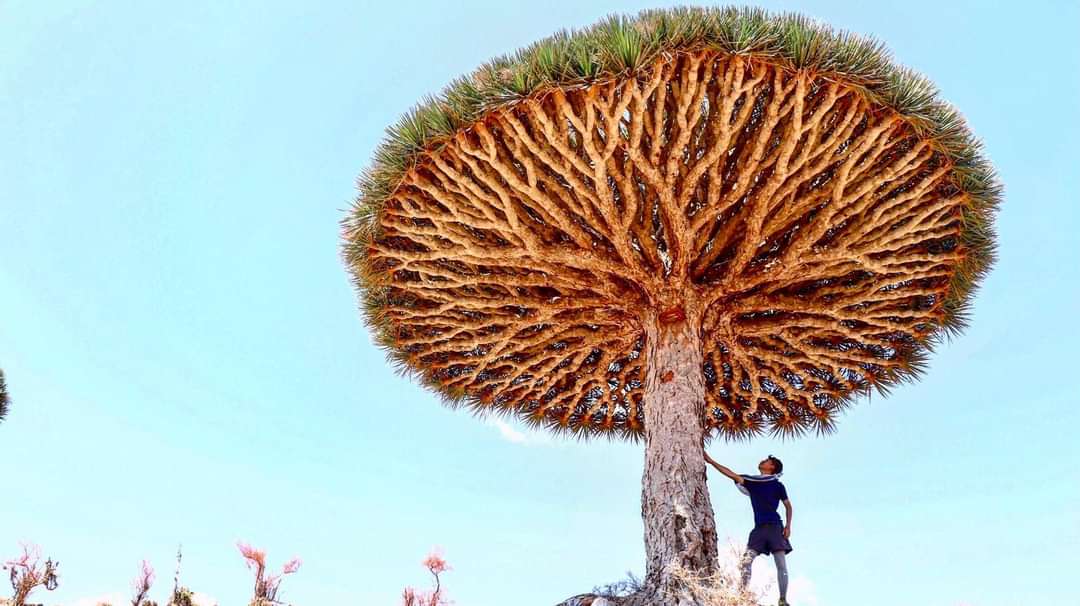 The Socotra Archipelago in Yemen has long been a land of mystery.

Over the centuries travellers returned from the Indian Ocean isles with bizarre tales - of trees yielding dragon's blood and cucumbers, forest of frankincense, and towering pinnacles in the mist.

In 2015 Yemen’s civil war severed this remote Arabian island’s air link to the outside world. However, with the easing of tensions, flights have quietly resumed, opening up this ecological Eden to visitors once again.

Socotra is located in the Indian Ocean, and is closer to Somalia than to Mainland Yemen, having broken off from the Arabian Peninsula some 80 million years ago. This isolation allowed Socotra to develop some of the most unique plant life on the planet; over thirty percent of the island’s plant species are endemic and found nowhere else on Earth.

Check also: Five Most Expensive Islands In The World To Stay.

The island has a total population of around 70,000 people, and they speak their own Socotri language. Apart from the main town of Hadibo, there exists little infrastructure on the island and visitors will spend most of their nights camping in the mountains and on desolate beaches. Socotra is a remarkable destination for camping, exploring, hiking, and immersing oneself in a natural world like no other.

With around 7,000-10,000 inhabitants, Hadibo is the largest “city” on Socotra and is one of the only places on the island that enjoys such conveniences like hot running water, flushable toilets, stable electricity, cell phone signal, and the occasional slow wifi. Socotra’s only hotels are in the city (the best being the Summerlands Hotel $75-$140 a night), as is most of the commerce. The Hajhir (Haggier) Mountains form the backdrop to the town, but the amount of plastic litter and garbage on the streets is off-putting.

Many items from the mainland and neighbouring countries can be found in the city’s bustling souq, making Hadibo an interesting stop to see a bit of local life, as well as purchase any last minute items needed for your trip. Traditional Yemeni clothing is also widely available in the market. Hadibo is also a place where you can change US Dollars into Yemeni Rial and sit down for a meal at a restaurant. The local fish market is a colourful place to visit as well in the early morning.

Otherwise, Hadibo is an unattractive city full of garbage, plastic waste and goats roaming wild on the streets.

How to travel to Socotra?

The Socotra Archipelago in Yemen has long been a land of mystery.

Over the centuries travellers returned from the Indian Ocean isles with bizarre tales - of trees yielding dragon's blood and cucumbers, forest of frankincense, and towering pinnacles in the mist.

Timing your visit to Socotra is important, as the island has two distinct monsoons— the windy monsoon from June through early September, and the rainy monsoon from November to early January.


The windy monsoon makes visits particularly unpleasant, as high winds cause sand and dust to cloud the air, disrupting the landscape and making hiking unattractive. Additionally, temperatures during the windy monsoon are hot.

The rainy monsoon in unpredictable, as downpours can occur causing Socotra’s fragile roads to become impassable. December sees the bulk of rainfall in Socotra, but October, November and January can see storms as well.

One benefit to risking travel during the rainy monsoon is the absolute beauty of the trees, flush with green leaves.  October and early November are excellent times to visit if you don’t mind taking the risk of a few potentially heavy rainy days, and the weather is excellent for trekking trips in Socotra’s Hajhir Mountains. Oceanic activities like snorkelling and diving are not great in the rainy monsoon period, as the swells are much larger and the water is cloudy.

The best time to visit Socotra is between February and May— the weather is generally pleasant and temperatures are not too hot, while the water is calm and clear. The only drawback is that the dryness of this season can result in quite a bit of haze and arid conditions, especially as the months proceed towards May.  January and February are best if you want to see the majority of flower blooms on the island.

By Air - NO LONGER UP TO DATE. UPDATES PENDING FURTHER INFORMATION.

Due to the bad situation in country, there are tour agencies arrange a tours to Socotra and will provide you with all needed info fot visiting Socotra, and I'll list some of them below:

Yemenia’s once weekly flight 607 / 606 from Cairo to Seiyun to Socotra and back is the only reliable way onto the island. This flight leaves very early Wednesday morning (02:00), travelling from Cairo to Seiyun, a desert city in Mainland Yemen’s Hadhramaut Valley, and continuing onto Socotra, before flying back to Seiyun and then continuing back to Cairo. This means that one can spend one or two weeks (or more) in Socotra without much difficulty and enjoy a reliable way of getting to and from the island.

It is also possible for foreigners to travel overland to Seiyun from Oman and catch the domestic leg of the flight from Seiyun to Socotra. However, it is not possible for foreigners to fly from Cairo to Seiyun and disembark / clear immigration in Seiyun. If you are interested in visiting Mainland Yemen, see our Inertia Guide to South Yemen for more detailed information.

You can find more info on this flight, how much it costs, and how to book tickets here.

Standard economy round-trip tickets from Cairo to Socotra cost between $950-$1250 plus bank transfer fees. For business class, add about $350 to the base fare. Round trip tickets between Seiyun and Socotra cost about $350. Prices change often and tickets cannot be booked online; flights regularly sellout about 2-3 months in advance. Inertia members travelling independently can book through our designated agent in Cairo directly.

In the spring of 2021, the route changed again. Air Arabia took over the route from Felix Airways and started flying between Abu Dhabi (United Arab Emirates) and Socotra. A direct flight departs every Monday morning at 10:00 AM, with arrival on the island of Socotra at 11:30 AM (local time). The return flight departs at 1:00 PM on Monday and returns to Abu Dhabi at 4:00 PM (local time).

Air Arabia ‘s flight departs from Abu Dhabi all year round. However, keep in mind that between May and September it is hurricane season. Due to bad weather, the flight may suddenly be cancelled or delayed. We therefore recommend traveling to Socotra between October and April.

There is an irregular supply “cement” ship that travels to Socotra from the Port of Salalah, Oman more or less weekly during the peak season (October to May). The journey cannot accurately be arranged in advance and it takes between 3-7 days depending on ocean and docking conditions to reach Socotra from Salalah.


There is no food available on the boat and after meeting a Japanese traveller who took the boat in 2019, it was described as “roach-infested”. Locals take occasional Qat and produce boats to the Yemeni port city of Al Mukalla, but these are also irregular and unreliable.

Since Socotra is an island with a relatively small population, there are limited ways to get around the island. The easiest and most effective is to hire a 4-wheel drive truck with a driver in Hadibo. There are several paved roads on the island, including a decent road that hugs the entire north coast, and 3 roads that cross through the centre of the island. Additionally, there are gravel, dirt and sand roads and trails throughout the island linking up some of the smaller bedouin communities.

Occasional public buses run in Socotra, especially between Hadibo and Qalansiah on the north coast of the island, as well as to Hadibo Airport. Besides that, public transportation is non-existent.

Hiking and camel trekking are popular activities on the island for travellers.