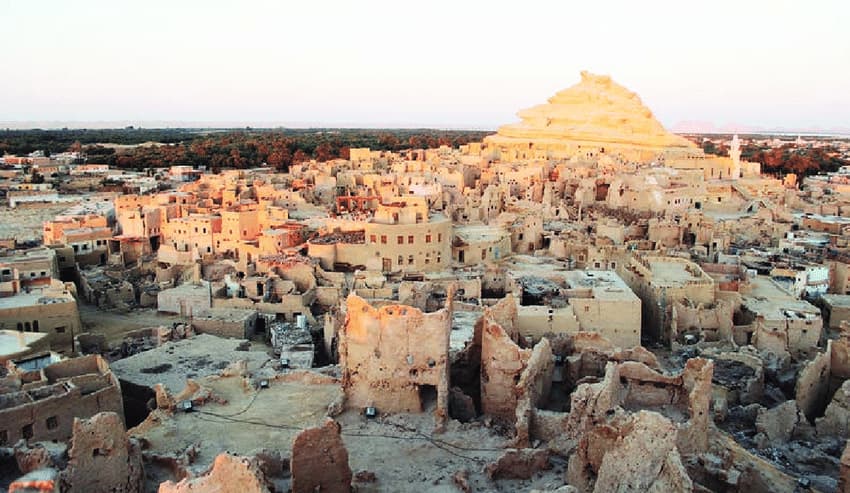 The most remote and singular of the oases in the Western Desert of Egypt is the oasis of Siwa. With about 33,000 people, This incredible green island in a sea of yellow sand has its own culture and history. The people of Siwa still speak their language, Siwate, which is closer to the Berber language of the desert dwellers further west than to the Arabic spoken in the rest of Egypt.

The Siwa Oasis (Arabic: واحة سيوة‎) is an urban oasis in Egypt between the Qattara Depression and the Great Sand Sea in the Western Desert, 50 km (30 mi) east of the Libyan border, and 560 km (348 mi) from Cairo.

About 80 km (50 mi) in length and 20 km (12 mi) wide, Siwa Oasis is one of Egypt's most isolated settlements, mostly Berbers, who developed a unique and isolated desert culture and a language called Siwi; they are also fluent in the Egyptian dialect of Arabic which is called "Masryiah" meaning Egyptian.

Its fame lies primarily in its ancient role as the home to an oracle of Ammon, the ruins of which are a popular tourist attraction that gave the oasis its ancient name Oasis of Amun Ra.

The entire population of the oasis, in the 13th century, lived within the walls of a clay brick fortress in the center of a town known as Shali until 1926, when a major thunderstorm that lasted three days destroyed it. Today Shali is a tourist site, where visitors climb the mud and salt mound, traditional building materials, to enjoy a panoramic view of the date palm and olive groves that stretch for miles in all directions. Today Siwanese olives are of extraordinary quality and taste and its mineral water, marketed in bottles, is considered the best and purest in Egypt.