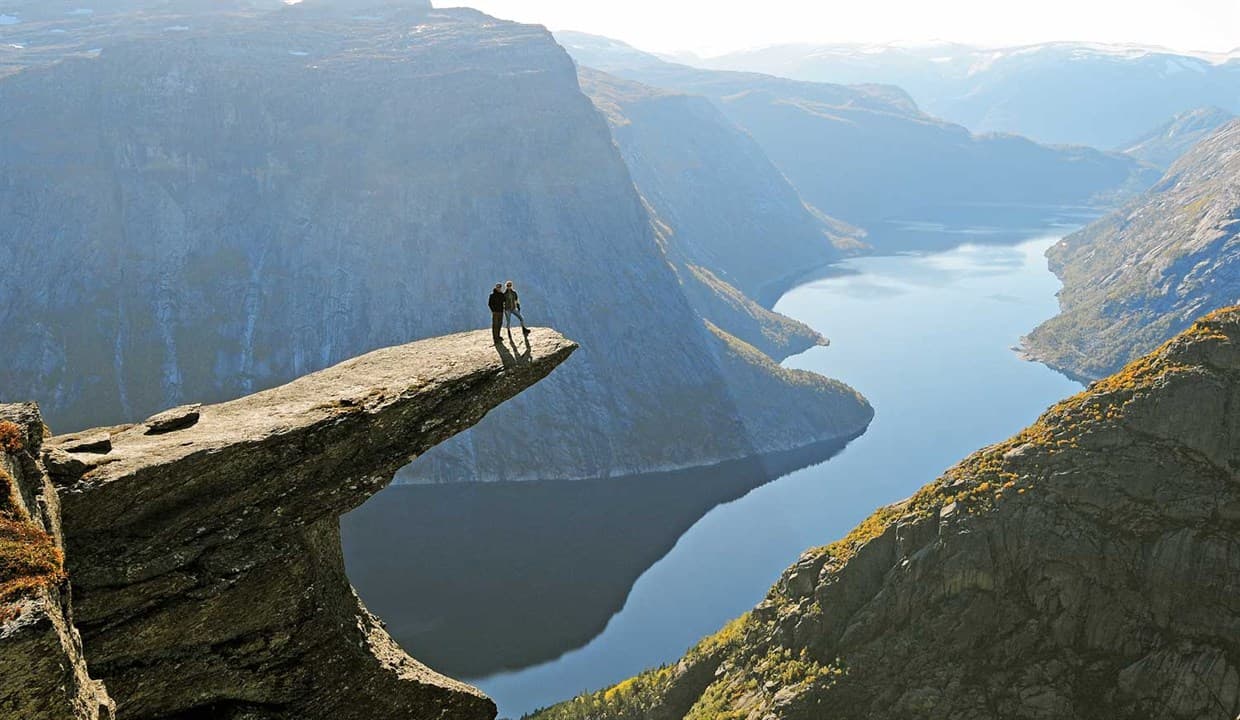 Troll's Tongue, or Trolltunga as it's known by the locals, is one of the most iconic landmarks in all of Norway - here's how to get there.

Tongue of Troll - stone ledge on Mount Skeggedal, near the town of Odda in Norway. Projection rises above the lake Ringedalsvatn at 350 meters. It is a place of pilgrimage for tourists, though, to go to climb, will need at least 5 hours.﻿

Read Also : Top 10 things to see and do in Iceland

Tucked away between fjords, villages, and towns, you will find some of the most beautiful and breathtaking rock formations in Norway, like Trolltunga (Troll's tongue). They have been here for thousands of years, shaped and battered by the Ice Ages and the elements.

Read Also : Amazing Places in Norway must be visited

Walking in the mountains gives you a feeling of freedom, a feeling of overcoming and conquering. Each mountain and each summit has its own personality, charm, and identity. Trolltunga rock in Norway has all this in abundance; there is no other rock formation quite like this one, it is without equal.

For each step you take, it is as if you are getting closer and closer to a kingdom of the trolls, carved in stone and ready to welcome you. Mythical, majestic, and with a magical atmosphere – far up in the mountains.

The Troll's Tongue is a part of a rock formation around 1,100 meters or 3,600 feet above sea level in Vestland in Norway. It hangs around 700 meters or 2,300 feet above the north side of Lake Ringedalvatnet.

The formation is young having only been formed around 10,000 years ago in the Ice Age (but the rock itself is ancient dating from the Precambrian period). During the Ice Age, the edges of glaciers extended up to the cliff and carved the rock. The water from the glaciers froze in crevices and broke large chucks off the mountain at there carried away by the glacier.

In recent years the Troll's Tongue has become an Instagram and social media craze and its popularity has exploded. Before 2010 less than 800 people hiked to it annually, in 2016 over 80,000 made the trek.

It is possible to do this hike from mid-June until mid-September.  You need to plan well before starting, and remember to take good mountain clothing, sturdy footwear, sticking plaster, food, drink and a map and compass with you. Start the walk early in the day and check the weather forecast beforehand.

There is no partly mobile phone coverage (Telenor) on the route, and if you are planning to stay overnight, then bringing your own tent is the only option. You can do the walk on your own, but if you prefer, you can also register for one of the guided walks.

Depending on snow and weather conditions, the season will vary from year to year. Here is a guideline:

Check the weather report before you go, and be prepared for changing weather!

All nature based activities are at your own risk. You will need sturdy hiking boots, bring extra warm clothing, rainwear and be prepared for bad weather. Bring map and compass, plenty to eat and drink, a torch and a simple first aid kit. Weather in the high mountains can change quickly - check the latest weather forecast before heading out. DO NOT attempt this hike in strong wind, heavy rain or in foggy weather. It is always colder in the mountains than down by the fjord. Respect the nature.

Every year there are search and rescue operations for hikers in serious trouble. Prepare well and be a responsible and safe hiker. Start early in the morning. Norway is far north, meaning daylight is short from September and nights are very cold. We recommend starting at latest 8:00 in the morning. Read more about weather in the fjords of Norway.