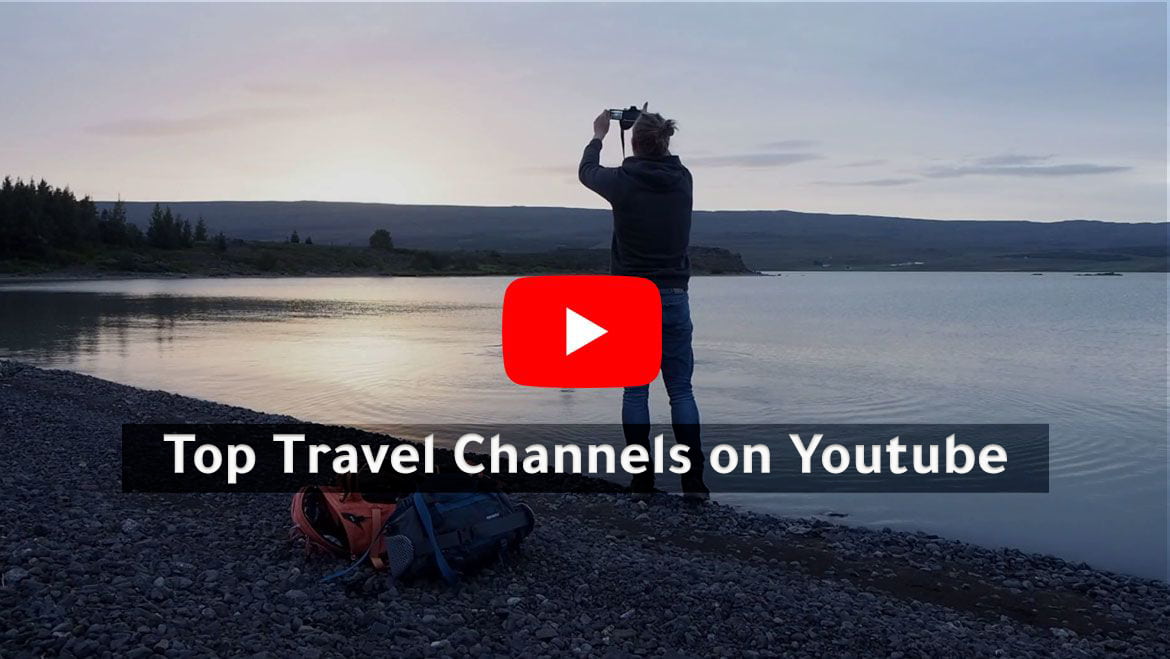 It is always said that travel has seven benefits in a person’s life, between recreation and getting to know new cultures and peoples, broadening a person’s horizon and his view of his surroundings, and other benefits, but traveling from one country to another in this era requires special arrangements that may not be available For many, and from here, a group of travelers traveling around the world appeared who filmed everything they were going through during their travels in a series of videos and published them on their YouTube channels so that those who were not able to travel could obtain some of these benefits. In this article, we'll follow five of the most important travelers across the world, and know how they began their journey.

You can read also : Amazing Travel websites For Destinations and Budget.

It can be daunting to figure out just what the hell to watch on Youtube, so start with these Top Travel Channels on Youtube, uplifting travel channels. Sure, you're grounded right now, but you can still stoke your wanderlust, plot your next adventure, and perhaps most importantly, stay curious and connected.

In 2016, Jordan left her home in the American city of Miami without any specific destination, or a date to return to her country, Jordan began broadcasting her first video on her YouTube channel (Travellite), in which she was preparing to arrange the travel bag that would take her to the outside world, Taylor left everything Behind her and began her journey, and her first trip outside America was in the Spanish capital, "Madrid".

Taylor in front of the Pyramids of Giza in Egypt - YouTube

Taylor visited many countries of the world in that period, with her own camera that told us everything about those countries she went to, and documented on the channel everything she went through and her impression of the country she visited. You may now think that Taylor has a lot of money, or that her family is rich enough to finance her trip, but that's not true.

Taylor says that she is a fan of traveling around the world, and that she does not have parents with great wealth, but during her work with her studies she was able to make some money, she did not spend it on anything, and put it in the stock exchange, and then financed all her trips from investing her own money. Through her channel, you can watch the fragrance of the past in Egypt, the beauty of the beaches of the Philippines, and the treatment of the people of Spain with tourists. An interesting tour offered by Taylor on her journey across the world "No Return".

Joe Hattab is a Video Creator, famous YouTube Star, who was born on March 18, 1990 in Jordan. Superstar on YouTube whose videos would be watched more than 553 million times.

One of the most popular travel channels on YouTube, with more than two million subscribers. In this channel, Louis Cole takes us on a tour around the world through his adventures with his friends in many countries. Louis does many personal adventures, such as: playing with snakes, diving Underwater with dolphins, long-distance bike rides, and more, he offers humorous challenges in every country he goes.

What distinguishes the Lewis channel is that it focuses on the entertainment side of travel, perhaps some travel many countries to see the landscape or relax, but Lewis offers a lot of adventures that you can do alone or with your friends in the country you are traveling to, between Kenya, Istanbul, France, India and others From the countries of the world, Louis will accompany us on his thrilling adventures.

With these words attributed to Mark Twain, Nadine opens her YouTube channel, which has 375,000 subscribers.

Read Also : Trolltunga: The Most Iconic Place in Norway

Nadine Sikora takes us on a tour of the world in its various continents. Over the course of seven years, Nadine has visited more than 50 countries, and documented everything she went through on her YouTube channel.

Nadine uploads a video every week, and her channel includes a lot of important tips for travelers, mistakes they should not make when traveling, and how to deal with people.

With over 4 million subscribers and a total of 192 million views, twins Jack and Finn take us on a tour of the many countries in the world they visit, filming their adventure.

The two young twins were unaware of the extent of the fame they would achieve through YouTube, since Jack broadcast the first video from inside his personal room seven years ago, as their channel has become one of the most followed travel channels on the site, and in a fun way with a lot of comedy the twins present their journeys that they do across the world.

Gabriel Morris began his journey 30 years ago, in those years he visited more than 50 countries spread over five continents around the world, and in his channel you find the summary of those trips he made. With Morris, you will wander the streets of Jerusalem as if you were there, and get to know the city of Petra in Jordan, and you will also take a look at the beauty of the Greek islands, and he will accompany you on a train tour; While snow is falling all around you in Romania.

Morris has authored many books on the art of travel, as well as many articles published in this field. Morris is very interested in photographing the main landmarks in the countries he visits, so if you want to enjoy seeing the most important tourist attractions in the world; This channel is your favorite way.

You can read also : Top Websites for Booking Flights at Cheapest Prices in 2022.

Once again with two brothers who love to travel, Alice and Marco from the USA travel the famous cities of the world, relaying the details of all these visits to us in a series of interesting videos on their YouTube channel.

What distinguishes Alice and Marco channel is that they care about the details of travel for those who do not have a lot of money, such as students or recent graduates, so you will find in their channel many ways to travel in the cheapest ways, as well as to take advantage of the time you have in preparing yourself to be a traveler around the world.

The channel is also interested in highlighting the most important things that you should do when you visit this or that country, and arranges the videos in it according to each continent, so you will find a playlist for Asia, another for Africa, a third for America, and so on. And in each country you will find a video that talks about the top 10 things to do there, or 10 things to avoid when traveling to that country.

Have you seen the movie "into the wild" before? Well, if you haven't watched it, it tells the story of a young man who wanted to leave his stable home life and go to the wilderness where nature is magical and live there, this time four guys, two guys and two girls, decided to implement the idea, so they bought a van and turned it into a YouTube studio to broadcast videos on their channel and roaming around the world.

A unique experience performed by these young people; They live in that wagon, eat, drink, and also travel, and they film their journey between cities, in the woods, with people in fields and deserts, and they stream it on YouTube.

It is like an open adventure for an exciting movie starring these young people. As for their sources of funding, they manufacture many medals and souvenirs and sell them to people, either via the Internet, or to those who throw them on the way.

Over the past eight years, 28-year-old Drew Binsky has made it his life’s mission to visit every country on Earth. Currently having visited 191 of the world’s 197 nations, Binsky has been documenting his travels on his popular YouTube channel and plans to complete the project later this year (though 2021 seems like a more likely target).

Short on ego and long on curiosity, Binsky’s mercifully short documentary-style videos (most clock in around 5-10 minutes) seek to inspire young people and travel newbies. He's at his best when he is profiling the unique characters he meets around the world, such as the “Sapeurs of Congo” and the “Plastic Man of Senegal.” He also highlights off-the-grid communities and runs down his list of the friendliest countries in easy-to-digest and professionally filmed packaging.

The YouTube subgenre of solo female travel has been one of its fastest-growing in recent years, yet Eva zu Beck (who joined in 2013) is a relative veteran of the platform. With curiosity, empathy, and fearlessness, Eva shows viewers what it’s like to be a woman traveling solo in countries like Syria, Iraq, and Saudi Arabia.

The Poland-born, Oxford-educated twenty-something shatters stereotypes and highlights the humanity of several war-torn destinations -- profiling female carpenters in Pakistan, running her first marathon in Iraq, attempting to buy a goat in Oman, and so much more. When last we checked in, she was quarantined on Yemen’s Socotra Island.